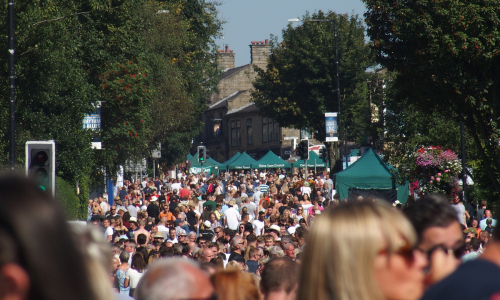 The Great British Rhythm & Blues festival was nominated for a UK Blues Federation Blues Award in the ‘Blues Based Festival of the Year’ category (for the 2019 event), as were many other excellent UK-based blues festivals.

And we’re so thrilled to announce that the Blues Festival in Colne, WON.

Naomi Crewe, Clerk of Colne Town Council (the Council have organised and managed the Festival since 2017) commented “The win is testament to all the hard work, time and love given from the Festival Team – from the street teams, to the stage crews and production teams and more; to the incredible artists and musicians who grace each of the stages; and mostly to the wonderful festival goers for taking the time to vote for the festival”. She added, “It’s an honour to have won this prestigious award. And for the announcement to arrive at a time when things are challenging for the music industry, makes the win all the more special.”

The 2019 event – the 30th Anniversary of the blues festival in Colne – was the third festival which was managed by Colne Town Council, with an estimated 25,000 people arriving in the town to enjoy it. This event surpassed all notions of a 30th year festival celebration.

“The wonderful weather certainly helped with the record turn out last summer” said Mary Thomas, Chairman of the Blues Working Group and Chairman of Colne Town Council. “The streets, especially Albert Road, were full; buzzing with music, activity, entertainment and smiling people. The atmosphere was wonderful, right through until late on Sunday evening”. She added, “We love that the festival was enjoyed by locals, as well as by music lovers who travel from far and wide to experience the event, all of whom help create a boost to Colne and the local area”.

Paddy Maguire, Artistic Director commented “I have been visiting the festival for 27 years and last year’s event was tremendous – magnificent even. The event exceeded my expectations in every way. The streets were whirring with musical action, yet the venues were also vibrant, as people sought shade from the sun and, of course, to experience the incredible musicians who were playing this year”.

Musical highlights included Ma Bessie & Her Pig Foot Band (with a one-in-one-out policy in place during her performance), Beaux Gris Gris (American blues-folk-soul band, with an electric, theatrical performance), Mike Sanchez (who got the whole joint jumping during his dance-able rock n roll set on Saturday night), and many more.

The festival would like to extend a heartfelt thanks to all the supporters who voted for them. The prize was awarded by public vote, with the UK Blues Federation Blues Awards being the most prestigious award in the UK Blues calendar. As well as the festival receiving an award, many acts playing the festival during the summer of 2021 also received awards, including Dom Martin, Connor Selby, Kyla Brox, Matt Long and more.

If you missed the online awards ceremony, you can listen again via the UK Blues Federation You Tube channel: https://bit.ly/UKBluesAwards

We are hoping to get tickets on sale for the 2021 festival in the not too distant future.